While at the University of Toronto, I carried out my post-doctoral work in the laboratory of Patrick Gunning, who specializes in medicinal chemistry and molecular recognition. Specifically, I worked towards the development of potent and selective inhibitors of the Stat3 (signal transducer and activator of transcription) protein, the over-expression of which has a well established relationship to the progression of many human cancers. The Gunning Group targets the SH2 (Src Homology 2) domain of Stat3 due to its critical role in eliciting protein function. 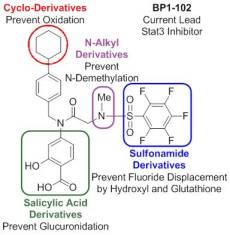 Metabolic stability analysis of the lab’s lead Stat3 inhibitor, led to the identification of several metabolites and directed our efforts to the derivatization of specific sites that are susceptible to metabolic degradation. Analogues with different moieties at these positions were prepared and subjected to in vitro and cellular activity assays with pancreatic cancer cell lines and various metabolic stability analyses. Lead compounds have been identified and the synthesis of a second library of compounds which combines the most potent and metabolically stable functionalities has been prepared. 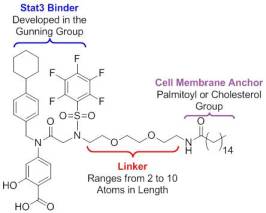 A novel approach to protein inhibition has recently been employed by the Gunning Group involving a known protein binder linked to a large hydrophobic moiety which serves to anchor the bound protein to the cell membrane. This anchoring then prevents the translocation and function of the targeted protein. While this concept proved effective when a high affinity peptide was used to bind the SH2 domain of Stat3, current work is focused on the use of small molecule binders to enhance in vivo stability and efficacy. Our efforts have produced a library of compounds linking potent Stat3 SH2 domain binders to cholesterol and palmitoyl moieties; biophysical and biological testing is underway. 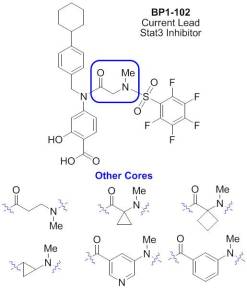 While several functionalities of our group’s Stat3 inhibitor scaffold have been thoroughly investigated, its glycine-derived core remains to be studied. To that end, I worked to prepare several libraries where this position is varied. Taking a pharmacophore approach, new compounds will investigate core scaffolds that appropriately direct the functional arms of our inhibitors onto the Stat3 SH2 domain. Computer-aided docking studies and preliminary in vitro data indicates that these compounds are potent and selective binders of the Stat3 SH2 domain, and will ultimately aid in furnishing an agent that will reach clinical trials.